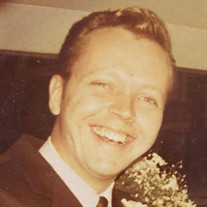 On Friday, December 11, 2020, William K. Hillner of Eustis, FL, loving husband and father of three children, passed away at the age of 77. Bill was born on November 23rd,1943 in Staten Island, New York to Karl and Lillian (Vincent) Hillner. He loved to entertain, and was active in the student union in college where he majored in Fun (Recreation) at West Virginia University. In a temporary departure from his higher education, he got to travel the world helping to map the ocean floor for NOAA’s hydrographic survey during his service in the United States Coast Guard. In 1969 Bill married Janice McArdle and returned to WVU, graduating with a Bachelor of Science in 1970. He spent the majority of his professional career as a dedicated employee at Penn State University in State College, PA working his way up from Assistant Manager of the Hetzel Union Building to Network Administration in the Office of Telecommunications for 23 campuses. Later on in life, mirroring his career in many ways, fun for him turned into something a bit nerdier. Coordinating and hosting activities turned into tinkering with technology, an interest he shared on different levels with all three of his children… creating a spark in each of them that helps guide them in their careers and creative endeavors even now. He was very proud of his three uniquely talented children. He had a passion for music, winning many dancing awards - even participating in the American Bandstand Television show as teenager, singing in the Nittany Knights Barbershop Quartet, and, with his wife, as a member of the handbell choir at the University Baptist and Brethren Church in State College, PA. His church community meant a great deal to him and he contributed to it as a member of several boards, and as the recording engineer for the services. Bill and Janice retired to Florida in 2009. They enjoyed adventuring, relaxing and spending time with family and friends before his health began to decline. At the end of this past November, just after his 77th birthday, he contracted Covid19 while a resident of an assisted living facility, and did not survive. Bill was preceded in death by his father Karl, and his mother, Lillian. He is survived by his wife of 51 years, Janice, and three children, Nicole Pawlowski of Leesport, PA, Christopher Hillner of Queens, NY, and Suzanne Hillner of Brooklyn, NY, his sister, Jane Francis of Tavares, FL, and his cousin Helen Shaffer of Myrtle Beach, SC. A memorial service will be postponed until May 2021. For now, please join us here on this site in remembering our beloved Bill; husband, father, friend. He was a truly honorable, gentle and kind man. The best dancer in town, he won over hearts with his sweet moves. Happy go lucky, and a little goofy - definitely a dad to the very core. A provider and a man who loved his family, even the furry ones, above all else.

On Friday, December 11, 2020, William K. Hillner of Eustis, FL, loving husband and father of three children, passed away at the age of 77. Bill was born on November 23rd,1943 in Staten Island, New York to Karl and Lillian (Vincent) Hillner.... View Obituary & Service Information

The family of William K. Hillner created this Life Tributes page to make it easy to share your memories.

Send flowers to the Hillner family.