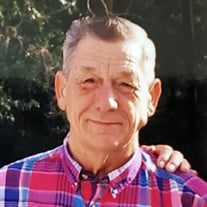 Walter Ray Stevens, 86, of Mount Dora, passed away Wednesday, October 21, 2020. Born in Akron, Ohio, he moved to Mount Dora in 1989 from Elkhart, Indiana. He worked for several companies such as GoodYear Aircraft, Chrystler Corporation, Cape Kennedy, General Electric, Bendix Electric, Crown International, GlobeStar Trailers, several electronic stores, Brevard Ambulance Service, and was Owner & Operator of Stevens Grading Services Construction Company. Walter was a member of the Community Chapel Church of Mount Dora, FL. He enjoyed his many hobbies of roller skating, traveling and camping, playing his keyboards, flying radio controlled airplanes but his greatest joy was his kids. He poured his heart into each and every one of them. He gave them his sense of adventure and creativity. He was a God fearing man and taught his children to always do the right thing and love the Lord. Walter is predeceased by his Wife, Barbara Stevens; Daughter Lynn Woodrum; and by Sister, Leona Burke. He is survived by his Sons, Donald (Kerry) Stevens of Goshen, IN and David (Shelly) Stevens of Orange City, FL; Daughters, Bonnie (Greg) Meisner of Lakeville, IN and Judy (Keith) Baughman of Mount Dora, FL; numerous Grandchildren, Great Grandchildren, extended family and friends. Privates Services will be held. Interment will be at Greenwood Cemetery, Eustis where he will be with Barbara. A celebration of life will be held at Community Chapel Church. Memorial donations may be made to Cornerstone Hospice House of Tavares or Community Chapel Church 3601 W Old US Hwy 441, Mt Dora, FL 32757. Online Guestbook available at www.hardenpauli.com Arrangements by Harden/Pauli Funeral Home, Eustis.

The family of Walter Ray Stevens created this Life Tributes page to make it easy to share your memories.

Send flowers to the Stevens family.