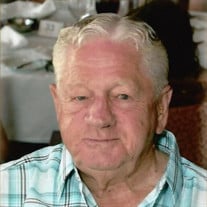 Thomas S. “Tom” Britt, age 84, Unicoi, passed away on Friday, May 14, 2021 at his home in Altoona, Florida while he was surrounded by his wife and loving family. He was a Unicoi County native and lived most of his life in Unicoi. Tom is a son of the late Jesse and Gladys May Isaacs Britt. He was a proud veteran of the United States Navy. Tom was a Gunners Mate II Class having served his country honorably during the Korean War. He enlisted into the Navy on September 20, 1954 and was assigned to the USS Franklin D. Roosevelt Aircraft Carrier and USS Coral Sea Aircraft Carrier. Tom was awarded the Navy Occupational Service Medal (European) and Good Conduct Medal. He was discharged from the Navy on November 19, 1957. Tom retired from Nuclear Fuel Services after twenty-five years of service, where he was employed as a Supervisor. He was a Machinist by trade and he also owned his own trucking business. Tom was a member of Unicoi Church of God and he also attended Umatilla Church of God in Florida. He was a member of the Johnson City VFW and the Erwin American Legion. Tom enjoyed camping, trout line fishing, going on vacations and watching NFL games. In addition to his parents, Tom was preceded in death by his son, Thomas Stephen Britt on May 17, 1992; two brothers: Ernest and Herman Britt; two sisters: Elenora Powers and Annabelle Stanley. Tom leaves behind to cherish his memory, his loving wife of thirty-eight years, Debra Jean Wolfgram Britt; his children: Phyllis Jones (Ronnie) Flag Pond, Debra Kay Britt, Erwin, Jessica Arnold (Butch) Florida, Thomas S. Britt, II (Mandy) and Joseph A. Britt, all of Unicoi; one brother: LeRoy Britt, Erwin; one sister, Sarah White, Unicoi; ten grandchildren; numerous great grandchildren; several nieces and nephews; his furry companion, Hopie Joy. The family will receive friends from 4:00-6:00 PM on Sunday, May 23, 2021 at the Unicoi Church of God. Reverend Eddie Blazer and Pastor Davy Cannon will officiate the 6:00 PM funeral service. Graveside service will be held at 11:00 AM on Monday in the Mountain Home National Cemetery. Everyone is asked to meet at the cemetery by 10:55 AM on Monday. Active pallbearers will be Dennis Mull, Mike Collins, Marty Stromski, David Britt, Junior Britt and Butch Arnold. Honorary pallbearers will be Burl Mast, Dewey Robinson, Bert Paulson, Mike Corwin, Ken Britt and Harry Britt. Flowers will be accepted however, those wishing my make memorial donations in memory of Tom to: Unicoi Church of God, 508 Tennessee Street, Unicoi, TN 37692 or Umatilla Church of God, Building Fund, 463 Umatilla Blvd., Umatilla, FL 32784. The family would like to extend a heartfelt thank you to Dr, Gordon Moughon, Dr. Ajay Bisht and Villages Compassionate Care Hospice Team for the excellent care given to Tom and his family.

Thomas S. &#8220;Tom&#8221; Britt, age 84, Unicoi, passed away on Friday, May 14, 2021 at his home in Altoona, Florida while he was surrounded by his wife and loving family. He was a Unicoi County native and lived most of his life in Unicoi.... View Obituary & Service Information

The family of Thomas S. Britt created this Life Tributes page to make it easy to share your memories.

Send flowers to the Britt family.