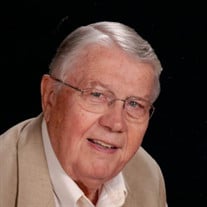 Stanley R. Petersen was born in Viborg, South Dakota, on July 14, 1932, the son of Rev. H. Irving and Margaret (Hansen) Petersen. After growing up in Minnesota and Wisconsin, he graduated from Harlan, Iowa, high school in 1950. He attended Dana College in Blair, Nebraska, for two years, then served in the US Army in Korea from 1953 to 1954. Upon receiving his discharge, he enrolled in the University of Minnesota College of Mortuary Science graduating in 1957. On June 15th, 1956, he was married to Darleen M. Holm at Luther Memorial Lutheran Church in Omaha, Nebraska. Upon graduating from college, he served an internship and worked at a Mason City, Iowa, funeral home from 1957 to 1961, when he joined the Olson Funeral Home in Forest City, Iowa. He purchased the business in 1972. Stan was a member of Immanuel Lutheran Church in Forest City where he served on the Board of Trustees, the president of the congregation and served on the Executive Council of the former Iowa District of the ELC. He was a member of the Forest City Rotary Club serving as president in 1974, chairman of the Rotary Youth Exchange Committee and is a Paul Harris Fellow. From 1985 to 1989, Stan served on the Forest City Council, was a member of the Forest City Chamber of Commerce, a board member, and Past President of the Forest City 2000 committee, and served on the Board of Directors of the former Forest City Bank and Trust. Professionally, he was a member of the National Funeral Directors Association, the Iowa Funeral Directors Association, serving on the Board of Governors from 1986 to 1988, Vice President, President Elect and President of the group from 1990 to 1991. Having an interest in antique and classic wooden boats, he helped organize the formation of the Clear Lake chapter of the Antique and Classic Boat Society (ACBS) in 1993. He became a member of the Board of Directors of ACBS serving until 1999. In 1993, he sold his business to longtime employee John Lund and retired from active funeral service in 1996. He and Darleen moved to Mount Dora, Florida, where they became members of the First Presbyterian Church. He then became active in the programs of the Sunnyland chapter of ACBS and has served on the Board of Directors. In February 2012, they moved to Waterman Village of Mount Dora. Stan is survived by his wife Darleen and their three children: Trudee Green (Sean) of Robertson, New South Wales, Australia, Sandy Gaston (Doug) of Orlando, Florida, and David Petersen of Jambaroo, New South Wales, Australia. Also, five grandchildren: Ben Mullaney, Logan Mullaney, Ryan Mullaney, Ian Gaston, and Natalie Gaston. Siblings include Rev. Jon Petersen (Dort) of Tacoma, Washington, Karl Petersen (Joan Pearson) of Bainbridge Island, Washington, Carol Petersen of Mesa, Arizona, Kaye Petersen of Tulsa, Oklahoma, two great-grandchildren and several nieces and nephews. He is preceded in death by his parents and grandson, Hayden Mullaney.

Stanley R. Petersen was born in Viborg, South Dakota, on July 14, 1932, the son of Rev. H. Irving and Margaret (Hansen) Petersen. After growing up in Minnesota and Wisconsin, he graduated from Harlan, Iowa, high school in 1950. He attended... View Obituary & Service Information

The family of Stanley R. Petersen created this Life Tributes page to make it easy to share your memories.

Send flowers to the Petersen family.