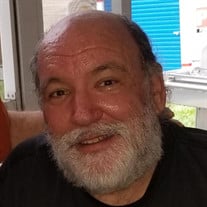 Ronald "Ron" Edward St. Pierre, Jr., 59, of Eustis, Florida, peacefully passed from this life on Wednesday, October 27th, 2021, surrounded by his loving family. Born and resided in Plymouth, Massachusetts, until he moved to Eustis in 2004. He... View Obituary & Service Information

The family of Ronald E. "Ron" St. Pierre created this Life Tributes page to make it easy to share your memories.