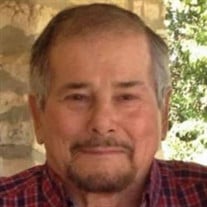 Roger James Blake, 81, of Grand Island, Florida passed away Thursday, January 28, 2021. Born in Boston, Massachusetts, he grew up in Zephyrhills, Florida, graduating from Zephyrhills High School in 1958. Roger joined the United States Marine Corps to serve his country. He moved to Odessa, Texas where he met and married the love of his life. In 1959, Roger moved his family to Levelland Texas and began working in the oil fields. He worked many years for Sitton and Norton Drilling Company while raising his sons, coaching them and other young men in boxing and baseball. He also loved auto racing and spent his spare time working and racing stock cars. In 1981, Roger moved his family to Midland, Texas to pursue his dreams of being part owner in a drilling company. He retired in 1999 at which time he and his wife moved to Houston and then in 2003 they settled in Grand Island Florida. Roger was a member of the American Legion and attended First Baptist Church of Umatilla. Roger is survived by his five sons and their spouses, Sonny James (Sam) Blake, of Dallas, TX, Roddy Gayle (Teresa) Blake, of Leesburg, FL, Robin Alvie (Denise) Blake, of Odessa, TX, Bobby Don (Lori) Blake of Grand Island, FL, and Keith Shane (Jeri) Blake, of Montgomery, TX; 3 brothers, Charlie (Pauline) Blake, of Daytona Beach, FL, Donny Blake of Alabama, Lee (Martha) Blake, of Inverness, FL; and one sister, Ellen Blake Barrows, of Zephyrhills, FL; as well as 9 grandchildren and 10 great grandchildren and many nieces and nephews. Roger was preceded in death by his wife, Alice “Charlene” Blake in 2005. He is also preceded by a great grandson, Dalton Riley Lewis, 1 brother, Kenny Blake and 1 sister, Mariam Blake Neal. Services will be held at Harden/Pauli Funeral Home Chapel, Eustis on Monday, February 1, 2021 at 2:00 PM. Interment will follow at Greenwood Cemetery, Eustis. The family will receive friends at the Funeral Home on Sunday, from 4:00 till 6:00 PM. Flowers are accepted, or memorial donations may be made to First Baptist Church Umatilla. Online Guestbook available at www.hardenpauli.com Arrangements by Harden/Pauli Funeral Home, Eustis.

The family of Roger James Blake created this Life Tributes page to make it easy to share your memories.

Send flowers to the Blake family.