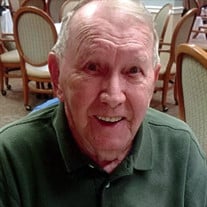 Robert G. Rudd (“Bob” or “Bobby Gene” to friends and family) left this world on July 12, 2021. He had recently celebrated his 90th birthday at home in Central Florida and was delighted to hear from so many friends and family who recognized his milestone. He was born in 1931 in McRoberts, Kentucky to Richard and Hilda Rudd. The oldest of five children, Bob’s family moved to Dayton and then to the Indianapolis area where he graduated from Shelbyville High School. After graduation, he took jobs in a defense contractor plant and with J.C. Penney (the latter helping him hone his self-proclaimed excellence in shirt folding). During the Korean War period, he served two years in the Indiana National Guard followed by a two-year enlistment in the U. S. Army. He was assigned by the Army to Pittsburgh which produced one of his most famous claims to fame: “Not a single North Korean soldier was able to cross the Monongahela River during my two years defending Pittsburgh.” Following his Army discharge (honorable, he emphasized), Bob used the G.I. Bill to enroll at Bowling Green State University (BGSU) in Ohio where he received a Bachelor of Science degree in Education and pursued a Master’s degree. During his undergraduate years he was asked to serve as a Resident Advisor in Kohl Hall — a role that would foreshadow his post-graduation career path at BGSU. But the most important thing that happened, soon after graduation, was meeting a special young lady named Mary who also graduated from and was working at BGSU. They were married in 1961 and just last month celebrated their 60th wedding anniversary. Bob joined the BGSU staff after graduation, serving as an Assistant Hall Director before moving on to a role in Admissions. After a couple of years there, Bob was asked to become the Director of Residence Life (later, Director of Housing), a role he held until his retirement in 1985. He truly enjoyed his co-workers (many of whom became lifelong friends) and took special pride in the career advancement of those who once worked under his leadership. Of course, there were times when his playful nature would surface at work, such as the time he tried to “save” a friend stuck in an interminable business meeting by slipping a note under the meeting room door that read, “We know you’re in there … FBI Hostage Rescue has been notified.” (That meeting ended in three minutes.) Bob and Mary settled into Bowling Green life and raised two sons there, Dave and Mike, to whom he imparted his love of family, sense of humor and enjoyment of sports. He loved playing golf with his sons and BGSU buddies, enjoying the game until he was 88 years old. For many years, his home in BG hosted a Friday Night poker party during which the “halftime ritual” was to eat Sloppy Joes during Johnny Carson’s monologue. After retirement, he and Mary moved to Central Florida to be near his parents. They lived in Mount Dora for over 30 years until moving in 2018 to the Lakeview Terrace Retirement Community in nearby Altoona. Bob enjoyed making new friends at Lakeview; his family thanks the Lakeview staff and residents for their excellent care and concern for Bob during his residency there. Bob is survived by his beloved wife, Mary; his sons Dave (Daina) of Wildwood, MO and Mike (Kathryn) of Fort Collins, CO; his sisters Gay Canfield of Bellevue, OH, Yvonne Trabucco (Bill) of Beverly, MA and Jo McCarty of Asheville, NC; grandchildren Michael (Becca), Thomas, Amy Cordova (Jacob) and Austin (Maddy Champ); and numerous nephews, nieces and cousins who loved and enjoyed him. He was preceded in death by his brother, Ralph and his brothers-in-law, Jim Larsen and Bob Canfield. Visitation will be from 2pm-4pm on Friday, July 16 at Harden-Pauli Funeral Home, 1617 S. Bay St., Eustis, FL. The family will have a private funeral ceremony the following morning and anticipates hosting a “celebration of life” gathering in Bowling Green, OH in the coming months. In lieu of flowers, the family invites you to honor Bob by making a donation in his memory to the Robert & Mary Rudd Academic Scholarship at BGSU. This scholarship has been assisting Wood County, OH high school graduates attain their Bachelor’s degrees in Education for over 20 years. To share an online condolence or fond memory with the Rudd family please visit hardenpauli.com.

The family of Robert G. Rudd created this Life Tributes page to make it easy to share your memories.

Send flowers to the Rudd family.