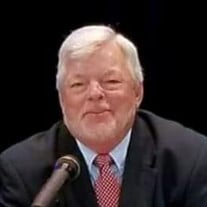 ROBERT EARL (Rob) NEWTON, 68, of The Villages passed away peacefully at Leesburg, FL. Rob was born to Robert I. Newton Jr. and Georgia Lee Francis in Kansas City, MO. He lived with his family in Prairie Village, Kansas until they moved to Sunrise Beach at the Lake of the Ozarks in 1965 and moved to Central Florida in the late 1970’s. He was Sr. Class President and graduated from Camdenton High School in Camdenton, Mo.in 1971. Rob had a tremendous enthusiasm for life and his natural charisma and gift of public speaking took him far. He won speech contests, had leading roles in plays. As a locker boy for the Kansas City Chiefs, he met and was coached by Jan Stenerud as a kicker. Rob was a kicker for the high school team. Rob loved music, played guitar and sang with a local band called The Velvet Sponge. Even then he was a budding leader and organizer. His junior year he was vice-president and co-organizer of STOP, (Students Tired of Pollution), then President his senior year. Their goal was to inform the public of the problem of pollution in the Lake area and help with passage of legislation to prevent further destruction of the Lake. He attended college at Central Missouri State where his journalism and interviewing skills were further developed and his love for broadcasting intensified. He was the news director at the college radio station. Always thinking big, he arranged an interview between leading students from Iraq and Iran during heated times of the Iran conflict which he submitted to National Public Radio. In 1973 during an economic slump, Rob convinced the University to fund a trip to the Kansas City Boat, Sport and Travel Show. He interviewed hundreds of potential vacationers who were dreaming of recreation and escaping the problems of the world. He also arranged a trip to World's of Fun to interview the Monkey's who had decided to start another tour. Rob was NOT the kind of manager to sit back and take credit for the people who worked with him. He was totally involved in any project from the planning stages to completion. Socially, Rob was quite the host, always surrounded by people he enjoyed and who enjoyed him. He went on to graduate from (CMSU), known now as University of Central Missouri in Warrensburg, Mo.in 1975. There he won Missouri's Muleskinner Award in his junior and senior year for a documentary he produced for radio and TV dealing with contributions that areas such as the Lake of the Ozarks make to Missouri's economy. Rob was always a hard worker, starting as a teenager working the gas docks at the Lake. He was a stagehand at Starlight theater in Kansas City. He was a contributing writer for the At The Lake magazine and wrote special interest articles for The Weekender portion of the magazine. He worked as General Manager, as well as on air personality and promotions at KLDN in Eldon, Mo. He later moved to Bisbee, Arizona where he was News and Sports Director for KSUN. Then in 1977, he returned to the Lake and became the Executive Director of the Camdenton Chamber of Commerce. In 1980, Radio communications magnate: Dalton Wright sent Rob, Don Connolly, and Jim Davis to the Golden Triangle of Central Florida to resurrect and rebuild radio station WEUS AM Radio-Country/National and Local News. His nearly fifty year highly successful radio and television career was legendary. Central Florida residents trusted his reputation, recognized his voice and laugh, and loved him as “The Voice of The Villages”. In addition to all his broadcasting work there, as President of Newton Sales and Marketing, he opened Boaters Gallery in the Seminole Tower Center in Sanford, Florida in 2000. Rob had always been an avid boater. This was a new concept for marina dealers to display their boats and products. James Floyd owner of Floyd Media Radio, Inc. at WQBQ 1410 AM & 95.1 FM Radio said: “Rob was one of the owners of WKIQ for several years in Eustis. He spent over 30 years at WDBO, and even was the station manager at WVLG. I worked with Rob at WLBE, and was thrilled when he came to work with us at WQBQ”. Rob has worked with some of the nation's most successful companies, including the ABC Radio Network, Six Flags Corporation, Clear Channel-iHeart Media, Cox Media Group, The Robert Palmer Family of Companies, The Villages, and The Lamar Hunt Worlds of Fun Amusement Theme Park Corp. Rob is survived by his sister: Suzette M. Snodderley of Sunrise Beach, MO; brother: David C. Newton of Gravois Mills, MO and step-daughter: Nicole Miller of Eldon, MO who he loved immensely and regarded her as his own. There will be a Celebration of Rob’s Life at Hiers-Baxley Life Event Center, 3975 Wedgewood Lane, The Villages, FL 32162 on Friday, April 8, 2022 from 6:00-8:00 PM with a Life Celebration Service at 7:00 PM. In lieu of flowers the family requests memorials to Project SOS, Support Our Soldiers, 2412 Due West Drive, The Villages, FL 32162-2605. Harden/Pauli Funeral Home, Eustis.

ROBERT EARL (Rob) NEWTON, 68, of The Villages passed away peacefully at Leesburg, FL. Rob was born to Robert I. Newton Jr. and Georgia Lee Francis in Kansas City, MO. He lived with his family in Prairie Village, Kansas until they moved to Sunrise... View Obituary & Service Information

The family of Robert Earl "Rob" Newton created this Life Tributes page to make it easy to share your memories.

ROBERT EARL (Rob) NEWTON, 68, of The Villages passed away peacefully...

Send flowers to the Newton family.