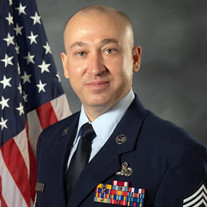 Reggie Eric Sawyers, 46, passed away September 11, 2020. Eric is survived by his loving parents James and Dolores Sawyers, sister Allison Schreiner and her husband Christopher, and niece Ashleigh Harris. Eric was born in Richlands, Virginia on April 21, 1974 and graduated from Graham High School in 1992. After graduating high school, Eric attended Bluefield College. In 1995, while working on his Bachelor’s degree, he joined the United States Air Force, serving four years on active duty. His passion for being outdoors led him to complete a Bachelor of Science degree followed by a Master of Science degree in Agricultural Fish and Wildlife Science in 2006 from the University of Tennessee. For 13 years, Eric resided in Eustis, Florida where he was a Fisheries Biologist at Florida Fish and Wildlife Conservation Commission. In addition to his career in wildlife and fisheries, Eric was proud to serve his country. On January 3, 2002, he enlisted in the United States Air Force Reserve. At the time of his passing, Eric was assigned to the 482d Communications Squadron, Homestead Air Reserve Base, Florida, serving as a Cyberspace Support Manager, culminating an 18-year career. In 2016, Eric earned his Bachelor of Science degree in Information Systems Management. In 2017, as a member of the Air Force Reserve, he deployed to Kuwait and on March 1, 2020, Eric was promoted to Chief Master Sergeant. Eric was a loving son, brother, uncle, and friend who will be deeply missed. He was a natural leader respected by all those who knew him. Not only was he incredibly intelligent, he also had an amazing sense of humor that could keep everyone around him laughing and having a great time. Visitation will be held Friday September 18, 2020 from 6pm to 7pm followed by a memorial service from 7pm to 8pm at Harden-Pauli Funeral Home, 1617 South Bay Street, Eustis, FL 32726. Interment for Eric will be on Tuesday September 22, 2020 at 10:15am, Dallas-Fort Worth National Cemetery. In lieu of flowers, donations may be made to the Veterans of Foreign Wars (VFW).

The family of Reggie Eric Sawyers created this Life Tributes page to make it easy to share your memories.

Send flowers to the Sawyers family.