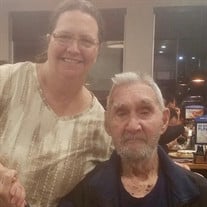 Paul F. Kellerman, Jr., 94, of Orlando, passed away Friday, May 29, 2020. Born Axemann, Pennsylvania, he moved to Orlando in 2000 from Montgomery, Alabama. He was a Jack Hammer Operator and was of Christian faith. Paul honorably served in the... View Obituary & Service Information

The family of Paul F. Kellerman Jr. created this Life Tributes page to make it easy to share your memories.

Send flowers to the Kellerman family.