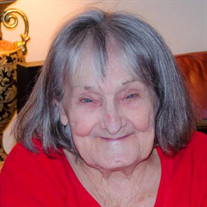 Doris Maxine Patterson, 86, of Oviedo, FL, passed away Wednesday, June 10, 2020. Born on July 23rd, 1933 in Etowah County, Alabama, Maxine was the third of eleven children of Jacob York Hilderbrand and Annie Estelle Oliver. She grew up in the foothills of the Appalachian Mountains in Etowah County and graduated from Etowah High School in 1952. She married a handsome Army man, Watie Earl Patterson on March 6th, 1954 in Gadsden, Alabama. Upon his release from the Army in 1955, they moved to Tipton, Indiana where Earl’s father lived. All 4 of their children were born in Tipton. Maxine tired of the long cold winters of Indiana, so in December 1963, they sold their home and everything they had except what they could fit in the red station wagon and a U-Haul trailer and moved to sunny Florida. They first moved to the Apopka area, then in 1966 bought a home on 14 acres of land and swamp on Forest City Road (SR 434) in Seminole County, which is now part of Altamonte Springs. Though she could not swim, Maxine loved the water. Most summer days, she and the kids would be at the Wekiva River, Rock Springs, Sanlando Springs, or the beach, trying to keep cool from the summer heat since the house had no air-conditioning. Maxine was a homemaker for many years, but as the kids got older, she worked outside the home doing various jobs including driving one of the first Food Trucks called Dots on the Dot that went to construction sites and events to provide mobile food service. By the late 1980’s, the rural area they lived of orange groves and 2-lane black top roads had drastically changed. The groves were gone, and they now had a busy four-lane road right in front of their house. Earl and Maxine decided to take advantage of all that traffic and opened a landscape nursery on their property. They worked extremely hard growing, buying, tending to and selling landscape plants. Maxine having a green thumb could grow and root anything! Their dream was to eventually sell the property and buy land to build another home out in the country (again) to retire. Unfortunately, Earl passed away in 1996, before he could retire, but after Earl’s death, Maxine fulfilled her dream by retiring and building a home in a rural area near Eustis in Lake County in 1997. She spent hours and hours as a labor of love planting many flowers, trees and landscape plants in her new yard. Maxine loved her family and over the years, some of her fondest memories were visiting back home in Alabama and the times her siblings came to Florida. Her children remember her as a loving, but sometimes tough mom, who wanted her kids to have a better life and more opportunity than she had. She was known by her family for the big and delicious meals she would prepare for her family for every holiday with multitudes of pies, cakes, and banana pudding. In June 2012, she moved to Savannah Cottage memory care home in Oviedo, where a loving staff cared for her for many years. Vitas Hospice staff also helped care for her this past year at Savannah Cottage and were a blessing as she peacefully passed away last Wednesday, June 10th. She will be missed by her family, and those who helped care for her. Maxine is predeceased by her Husband Watie Patterson (1932-1996); Brothers, Douglas (1932-1975) Joe (1936-1999), Jack (1938-1977), Harold (1942-2015), Dennis (1945-1945) and Richard (1949-2010); Sisters, Gladys (1929-1930), Judy Bates (1944-2008) and Janice (1951-1951); and by Grandsons, Steven Kerr (1973-1998) and Douglas Patterson (1986-1986). She is survived by her Son, Phillip Patterson (Lisa) of Umatilla, FL; Daughters, Earlene Adkison (Keevan) of Eustis, FL, Katina Burton (George) of Orlando, FL, and Sonya Balkcom (Chuck) of Eustis, FL; Sister, Mazene Anderson of Winter Springs; Grandsons, Craig Burton (Melanie), Zack Patterson, and Storm Patterson; Granddaughters, Jessica Brett, Amy Brett-Anderson (Mike), Candice Balkcom Able, Gina Adkison Melville (Eddie) and Abby Stump. Great-grandchildren, Skylar Brett, Savannah Melville, Jaxon Anderson and Bridget Melville; Nephews, Lawayne Hilderbrand (Renee), James Anderson, Donald Bates, Brian Bates (Maggie), and Nicholas Bates; Niece, Annie Hilderbrand Anderson (Chris) and by numerous extended family and friends. Services will be held at Harden/Pauli Funeral Home Chapel, Eustis on Tuesday, June 16, 2020 at 2:00 PM. The family kindly requests that your wear a face mask when coming to the service. The family will receive friends at the Harden/Pauli Funeral Home Chapel, Eustis on Tuesday, June 16, 2020 from 1:00 PM till 2:00 PM. Private Interment will be held at Florida National Cemetery, Bushnell. Online Guestbook available at www.hardenpauli.com Arrangements by Harden/Pauli Funeral Home, Eustis.

Doris Maxine Patterson, 86, of Oviedo, FL, passed away Wednesday, June 10, 2020. Born on July 23rd, 1933 in Etowah County, Alabama, Maxine was the third of eleven children of Jacob York Hilderbrand and Annie Estelle Oliver. She grew up in the... View Obituary & Service Information

The family of Maxine Patterson created this Life Tributes page to make it easy to share your memories.

Send flowers to the Patterson family.