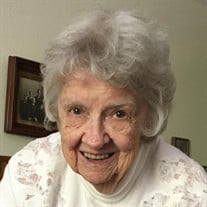 Marjorie (Marge) Iris Hawkins, 97, of Eustis, passed away Saturday, March 19, 2022. Born in Brainerd, Minnesota to Ira and Ina Tomlinson. She was preceded in death by her two younger brothers, Leon and Alton. She was very close to her cousins, Bunnie and Dorothy (and many other cousins) many nieces and nephews. In her early twenties Marge was a teacher in a one room schoolhouse in rural Northern Minnesota. Later she worked for WCCO TV, Honeywell, General Mills and Eichhorn Insurance, all in Minneapolis, she enjoyed each of her jobs very much. She was a longtime member of Grace & Truth Chapel in Columbia Heights, Minnesota, where she spent many years with wonderful friends and worshipping the Lord. Marge will be remembered by most for her love of cooking and feeding everyone! She and Lin had so many wonderful friends and neighbors in the Minneapolis area who she kept in touch with often. She was a very accomplished seamstress and tailor-she made many quilts over the years, she also loved to knit and crochet along with many other crafts. She and Lin moved to Eustis in 2010 from Minneapolis, Minnesota. Lin went to be with the Lord shortly after they moved here and Marge enjoyed the last years of her life in the Florida sunshine. Marjorie is survived by her son, Timothy (Lorrie) Hawkins, Bemidji, MN; daughters, Terry Porret (Late husband, Harold) , Coeur D Alene, ID, Mary (Eric) Lehman, Tavares, FL; grandchildren Heidi Porret, Samuel (Karin) Porret , Nicholas Hawkins (Rheana), Abby Hawkins (Noel), Andrew Lehman, Ryan Lehman (fiancé Katie), Alexandra Lehman; great-grandchildren Stephanie (Leo) Lewis, Emily Porret, Samuel Porret, Rachel (Kyle) Perry-Handorf, Kristoffer Rutherford (Kayla), William McCarthy, Alivia Hawkins, Nicholas Hawkins; great-great-grandchildren; Karianne Lewis, Haileymae Lewis, Dean Perry-Handorf, Kimber Rutherford and two step great great grand children, Kinley Phothivongsa and Kinan Phothivongsa. Marge will be laid to rest with her late husband of 67 years of marriage, Samuel (Lin) Hawkins at Fort Snelling National Cemetery, St. Paul, MN later this summer.

Marjorie (Marge) Iris Hawkins, 97, of Eustis, passed away Saturday, March 19, 2022. Born in Brainerd, Minnesota to Ira and Ina Tomlinson. She was preceded in death by her two younger brothers, Leon and Alton. She was very close to her cousins,... View Obituary & Service Information

The family of Margorie Iris Hawkins created this Life Tributes page to make it easy to share your memories.

Send flowers to the Hawkins family.