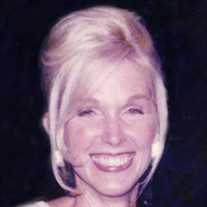 Loretta Aline Arnold passed away on December 27, 2020 after enduring complications following surgery. Loretta was born on May 21, 1944 in Ocala, FL to Walter Herman Fore and Lucy O’Berry Fore. She grew up in Central Florida and was a lover of most things outdoors. She was an accomplished water skier competing alongside world champions and some of her fondest times of her childhood were spent on the water and in the woods with her “Daddy”. After attending Rollins College in Winter Park, Loretta became an active member of the Orlando community. She was stunning from a young age participating in beauty contests and serving as a sponsor and model for local businesses. “Lo’s” social nature was a defining part of her powerful personality and she met some of her best friends as a member of the Spinster’s Cotillion of Orlando including her husband Herm through his affiliation with the Orlando Bachelor’s Club. Herm and Loretta married in Orlando on January 28, 1968 and embarked upon their journey of Herm’s career in the Air Force through many cities including Fort Walton Beach, FL, Montgomery, AL, Shreveport, LA, and then finally a long term stay in Northern Virginia. They remained in Virginia, met lifelong friends and raised Nikki and Michael there for a beautiful 23 years. While in Virginia, it would be no surprise that Loretta was active. She was a born leader and it reflected in everything she pursued from her place as President of The PTA, her advocacy for education and schools, her community action work to her impressive career as a sales executive in the military brokerage business where she accomplished every sales goal and set company records. Some of her favorite accomplishments were her undefeated soccer teams when she coached Nikki and her childhood friends. Following her sales career, she decided to pursue her passion for decor and design by opening her antique and reproduction furniture store, Elizabeth and Ashley (Nikki’s and Mike’s middle names) in Old Town Alexandria. If you were close to Loretta or if you experienced one of her beautiful homes, you were likely to ask her guidance on your own decorating project. In 1999, Loretta and Herm retired, moved back to Central Florida and built their special home on Lake Harris in Tavares. This home was her masterpiece and the pinnacle representation of her style, exquisite taste and uniqueness. Over her life, Loretta found equal success as a competitive tennis and bridge player. For such a beauty, she was a tomboy and loved all things sports as a participant and observer. One thing was consistent throughout her life - she loved to win and hated to lose. She was a competitor at her core. Her standard for excellence in all aspects of her life was difficult to rival or meet. Her strong will, strength and generosity of spirit made her truly one in a “million trillion”. Loretta is survived by her husband of 52 years, Lloyd Herman “Herm” Arnold; son Michael Arnold of Sanford, FL; daughter Nicole “Nikki” Arnold of Atlanta, GA and granddaughter Ashley Arnold of Seneca, SC. Loretta cherished her closest family and friends dearly and held loyalty to all as her highest value. Loretta will be laid to rest in Arlington National Cemetery. Arrangements for a local celebration of her life will be forthcoming. In lieu of flowers, contributions may be made, in the memory of Loretta Arnold, to Cornerstone Hospice by going to https://cornerstonehospice.org/ and clicking on “Donate”.

Loretta Aline Arnold passed away on December 27, 2020 after enduring complications following surgery. Loretta was born on May 21, 1944 in Ocala, FL to Walter Herman Fore and Lucy O&#8217;Berry Fore. She grew up in Central Florida and was a... View Obituary & Service Information

The family of Loretta Aline Arnold created this Life Tributes page to make it easy to share your memories.

Loretta Aline Arnold passed away on December 27, 2020 after enduring...

Send flowers to the Arnold family.