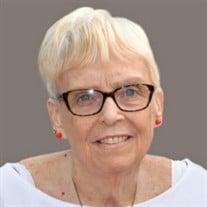 Linda Kay Madaus, age 71, died peacefully on Wednesday, Oct. 27, 2020, in Orlando, Fla., with her husband, Steven and son, Jevonn by her side. She was born on June 23, 1949, in Madison, Wis., and was the only child of Ervin and Mary Jo (Clark) Kreger. Linda graduated from Central High School in 1968. She went on to work for WARF/Hazelton Labs/Covance as the assistant to the medical director for 20+ years. Linda was engaged to the love of her life, Steven Madaus, in front of her three children at Walt Disney World and they were married on Sept. 20, 1986, and just celebrated their 34th wedding anniversary. Linda became a foster parent in 1987, fostering over 30 foster children and special needs foster children, and retired as a foster mom in 2001. Linda was a devoted mom and supported all of her children playing their favorite sports. She enjoyed being with her family and cooking, especially at holidays, and her many trips Disney World. One of the milestones in Linda’s life, was being able to adopt three children the day after 9-11. Linda was the sextant of the Medina Cemetery from 1998 until 2004. Linda moved to Orlando, Fla., in 2014 and has been a member of the Disney Annual Passholders ever since. She spent many hours at home with her faithful dog Keegan and online on Facebook messaging passholder members, giving advice for their vacations. Linda thoroughly enjoyed camping and the Princeton Flea Market (string cheese and cheese curds) and then a trip to an Amish bakery. Linda is survived by her husband, Steven M. Madaus of Orlando, Fla.; six children, Robert (Julie) Speropulos of Mauston, Wis., Tammy (Brian) Uhl of Ashwaubenon, Wis., Peter (Tricia) Speropulos of Marshall, Wis., Julian Madaus of Altalnta, Ga., Jevonn Madaus of Washington State, and Jeraldo Madaus of Minnesota; six grandchildren, Hunter, Katherine, Elizabeth, AJ, Nathan and Tyler; mother-in-law, Betty Madaus of Marshall, Wis.; brothers-in-law, Craig (Julia) Madaus and Todd (Carolyn) Madaus; and many nieces and nephews. Linda is further survived by long-time friend, Mary Lackovich; and two special grand boys in Florida, Jason and Joshua. She was preceded in death by her parents, Ervin and Mary Jo; her grandparents, Dan and Kathryn Clark and Ernest and Helen Kreger; as well as several uncles and aunts. A private family service and burial will be held. Linda’s family would like to thank all of the health care workers that cared for her over the years, Kent Hartung and the nursing staff at Advent Health downtown Orlando in the Palliative Unit. Online guestbook available at www.hardenpauli.com

The family of Linda Kay Madaus created this Life Tributes page to make it easy to share your memories.

Send flowers to the Madaus family.