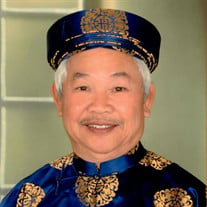 Kiet Minh Le, age 81, of Mount Dora, passed away peacefully and surrounded by his family, on Wednesday, September 8th, 2021. He was deeply respected and will be lovingly remembered by his wife of 52 years, Luan Le; his children, Diem Trang Tu (Don Tu), Thao Hoang (Dai Hoang), and Phuong Truc Le (Christopher Reed); his brothers Giao Le and Hang Le, and his sister Dieu Do and his eight grandchildren whom he loved deeply. Kiet was born on May 29, 1940, in Vietnam. He became a Naval Officer in the South Vietnamese military as a young man. He fought for his country and endured years of imprisonment. He sadly fled his beloved homeland so that his daughters might have a brighter future. At the age of 41, he planned and built a large boat for hundreds of people and also secured funding for the escape. After an extremely harrowing trip, Kiet began his life anew in the United States with only $80 in cash. (He left Vietnam with a total of $100 from his father, but unknowingly used $20 for beer on the plane—the last leg of their journey!) He had no knowledge of the English language, and he had a wife and 3 young daughters to support, but he persevered. His daughters never wanted for anything. They all went to college and beyond. Kiet loved to tinker with things. He could build anything that he saw if he decided that he wanted to replicate it. He also had a passion for gardening, with a green thumb only rivaled by that of his wife. A big source of contention between them was how to properly share their gardening space. Luan would uproot and move his plants, and Kiet would do the same to hers, all in the name of gardening honor. At the age of 73, he built a solid-wood structure so that his Dragon Fruit vines could climb. Unfortunately for him, he had built it so high that it could be seen from the road, and he was forced to take it down after receiving a complaint from the Homeowners Association. To his great dismay, the Bill of Rights did not protect his right to build an elevated gardening structure! Along with Kiet’s love for his family and gardening, he loved sports. He was a champion SCUBA diver in Vietnam; he spear-fish hunted as a young man with his military buddies; he also competed in table tennis at a national level, and excelled at soccer. Kiet enjoyed playing tennis socially, and came to love football after he arrived in America. The Dolphins never failed to let him down, but he remained a fan to the end. He was intimately involved with the Vietnamese Navy Veterans for a democratic Vietnam, a cause dear to his heart. He continued to dream of a free Vietnam, the land that raised and shaped this fine man. Kiet was a strict father, but all that austerity melted away when he became a grandfather. His happiest moment were spent at family gatherings. He loved them all the same...(but Keira the most). Services for Kiet will begin at 10:00 am at the Harden-Pauli Funeral Home Chapel on Sunday, September 19, 2021, with Buddhist Ceremonial Rites and Military Funeral Rights concluding by 1:30 pm.

Kiet Minh Le, age 81, of Mount Dora, passed away peacefully and surrounded by his family, on Wednesday, September 8th, 2021. He was deeply respected and will be lovingly remembered by his wife of 52 years, Luan Le; his children, Diem Trang Tu... View Obituary & Service Information

The family of Kiet Minh Le created this Life Tributes page to make it easy to share your memories.

Send flowers to the Le family.