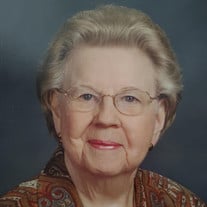 Janet Lankin entered into eternal rest on March 7, 2021, having lived 94 wonderful years. She was born April 13, 1926 in a home built by her father and grandfather in Elkhart, Indiana. Her parents were Carl Otto Winterhoff and Mary Evelyn Bradford, he being of German descent and her mother a direct descendant of Governor William Bradford the Pilgrim father. Janet attended Elkhart High School graduating in 1944. Three years later in August of 1947 she was united in marriage to Lee E. Strong who had returned from serving in WWII. They relocated to Kalamazoo, Michigan where their four children were born and in 1964 the family moved to Mt. Dora, Florida. She lost her husband of 46 years in 1993, after which she met and married Mr. Wilbert (Bill) Lankin in 1995. They resided in Tavares. Throughout her working life she was an outstanding mother and homemaker, as well as an interior decorator for a local mobile home company and a secretary for the Lake County Water Authority. She was a 51 year member of Faith Lutheran Church in Eustis serving as church secretary, member of Alter Guild and many committees. She was preceded in death by her parents and sister, Mary, and is survived by her four children: Cynthia Strong Baldree of Orangevale, California, Steven Strong of Eustis, Florida, Jessalin Howell of Mason, Ohio and Patricia Green of Valrico, Florida as well as 8 grandchildren and 10 great grandchildren. In addition, she welcomed into her family 3 stepdaughters with their children and grandchildren. Our dear Mother graciously blessed this earth with her kindness and love, intellect and wit, perseverance throughout hard times, and faith and devotion to her Lord and family. Her endearing spirit lives! Visitation will be held from 11:30AM till 12:30PM Wednesday, March 17 at Harden Pauli Funeral Home, Eustis, followed by a graveside service at 1:00 PM at the Pine Forest Cemetery in Mount Dora, FL.

Janet Lankin entered into eternal rest on March 7, 2021, having lived 94 wonderful years. She was born April 13, 1926 in a home built by her father and grandfather in Elkhart, Indiana. Her parents were Carl Otto Winterhoff and Mary Evelyn Bradford,... View Obituary & Service Information

The family of Janet A. Strong Lankin created this Life Tributes page to make it easy to share your memories.