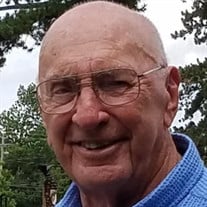 A Daughter's final tribute to her Dad My Dad. Aka Papa, aka Jack, aka Smiling Jack, was a proud Navy Veteran during the Korean conflict. Dad passed away about 1:00am today, July 18th 2020. For his final escape he eloped to heaven. Rest in peace Dad. Dad had a full life and did things his way, strong willed and stubborn to the very end. He was a graduate of RIT, as an electrical engineer he worked for Stromberg-Carlson out of college and then GE in Syracuse, where he truly enjoyed making Manlius his home, and loved all the small town charm & beautiful hills and countryside. His work took him/us to live in Titusville FL & he worked at Cape Canaveral and then a move to Clear Lake City TX where he enthusiastically worked at NASA. In the late 1960's we moved back to Manlius. Along the way he built several houses and always made the best out of what he had. Mid to later in life he ended up north of the Orlando FL area and enjoyed getting his pilot license as well as glider pilot license, he actually taught a little, that brought him much joy, The engineer in him was always there, he bought and restored an old Stinson plane and flew it to Oshkosh WI for an air show...lol, well, he got 125 miles away and it broke down...but at least he got up there. He was born in Fairport NY and loved his family & friends. He still has an older sister Betty Herendeen and younger sister Joyce Aldrich in the Rochester/Canandaigua area. He is survived by me, Debbie Robson Burr (his #1 daughter) of Cicero NY, and a son Brian Robson in Atlanta GA., grandchildren include Morgan Burr of Liverpool NY, Meghan Davidson, Patrick and Dan Robson all in the Atlanta GA area. In addition he was blessed to have 3 great-grandchildren, Cole, Parker and Lizzie Davidson all of Atlanta GA. And of course can't forget his first wife, my Mom, Margo Robson, residing in Clearwater FL, and he was predeceased by his 2nd wife Amorette Robson. Dad's senior years were filled with much love and enjoyment living in the Sunlake Estates Community in Grand Island FL, he had many friends and loved playing softball for the Scrub Jays. For the last 7 years he has been happiest & smiled daily with his wonderful lady friend, Erika Duwel, whom he adored and loved. Both Erika and their dog, Missy, made every day bright, and for that I am so thankful. 2020 took a toll on Dad, as the Alzheimer's disease reared its ugly head. Over the last 5 months he had been in 2 assisted living facilities, they took good care of them. This last Monday he had a fall and fractured his hip, ended up having surgery later that day for a partial hip replacement. Last night he took a turn for the worse and had respiratory complications, and that was that, the END. At Dad's ripe old age of 91 years he's taken his stairway to heaven. Meet Louis Armstrong, Lawrence Welk and dance all night to your old favorite Dixieland bands and big band sounds. Alzheimer's disease is sure sad for the patient and for family members to watch, memory loss of what happened 5 minutes ago is common...yet Dad always remembered me and all his family. Last week he told me he had a secret, not to tell anyone..."that I was the best daughter"...lol/tears, I said why can't we tell everyone that...poor Dad, he had a way about him. One of his favorite expressions was "are we having fun yet"? Well, Dad, the fun is just beginning for you...may you rest in peace and enjoy seeing your loved ones & animals waiting at the Rainbow Bridge to welcome you. Love you so much Dad, thanks for all you did and thanks for the memories. No services will be held at this time, say a prayer and hug your Dad. Once cremated his remains will be interred at Florida National Cemetery for Veterans in Bushnell FL.

A Daughter's final tribute to her Dad My Dad. Aka Papa, aka Jack, aka Smiling Jack, was a proud Navy Veteran during the Korean conflict. Dad passed away about 1:00am today, July 18th 2020. For his final escape he eloped to heaven. Rest... View Obituary & Service Information

The family of Jack S. Robson created this Life Tributes page to make it easy to share your memories.

A Daughter&#39;s final tribute to her Dad

Send flowers to the Robson family.