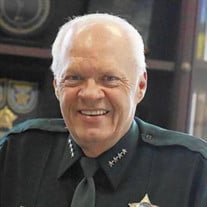 Sheriff Gary S. Borders, 61, of Howey In The Hills, passed away Tuesday, November 16, 2021. Born in Ashland, Kentucky in 1960, he moved to Florida shortly after graduating high school to help his brother with a family-owned carpet cleaning business. In 1980, he began his career with the Osceola County Sheriff’s Office and obtained his Corrections Officer Certification through the Criminal Justice Standards and Training Commission in March 1981. He quickly promoted through the ranks of Sergeant and Lieutenant and was selected as the Assistant Jail Administrator at the young age of 24. In 1989, Sheriff Borders was hired by the Lake County Sheriff’s Office to supervise the Lake County Jail. He served in the capacity of Major and Chief Deputy in the Criminal Justice Operations Bureau until his appointment as the Sheriff of Lake County in 2006. In his first election in 2008, the citizens of Lake County elected him in a landslide victory to remain serving in this capacity; he was overwhelmingly re-elected in 2012. In addition to his law enforcement duties, the Sheriff also spent a great deal of time serving on numerous boards such as Commissioner for the Florida Corrections Accreditation Commission, Board of Directors for the Florida Sheriffs Association, Educational Foundation of Lake County, Central Florida Crimeline Board of Directors, as well as the Institute of Public Safety Advisory Board. He was also a member of the West Central Florida Police Chief’s Association and Lake County Conservative Founder’s Club. Sheriff Borders received many awards throughout his career to include the Florida DARE Sheriff of the Year, 2008; Boy Scouts of America Central Florida Council, Golden Eagle Honoree, 2009; Eustis Elks Lodge, Citizen of the Year, 2009; Lake Eustis Area Chamber of Commerce, Public Service Award, 2009; Lake County Community Service, Leadership Award, 2010; and the Leadership Lake County, Leader of Distinction, 2012. Sheriff Borders retired from office in 2017, at which time he remained a resident of Howey-in-the-Hills, Florida. He enjoyed playing sports, was a huge fan of the Kentucky Wildcats and Orlando Magic, and loved spending time with family. He is survived by his son, Jason D. (Jennifer) Borders of St. Cloud, FL; niece, Jennifer Gilchrist of Hoover, AL; great nieces, Brittany Beard, Natalie Beard; brother, Jeff Welch of Minneola, FL; extended family, Baby Ann Irvin, Reginald Irvin, Lindsey Irvin, Tia Irvin, Erica Irvin, Ke'Laura Irvin, Anaysia Irvin, Drayden Dobbson, Trey Irvin. Gary will be laid to rest at Dixon Cemetery in Ashland, Kentucky. A public celebration of life services will be held at LifePointe Church, Eustis on Friday, December 3, 2021 at 10:00 AM. In lieu of flowers, memorial donations may be made to Cornerstone Hospice, the Boys & Girls Clubs of America or Big Brothers Big Sisters of America. Online Guestbook available at www.hardenpauli.com Arrangements by Harden/Pauli Funeral Home, Eustis.

Sheriff Gary S. Borders, 61, of Howey In The Hills, passed away Tuesday, November 16, 2021. Born in Ashland, Kentucky in 1960, he moved to Florida shortly after graduating high school to help his brother with a family-owned carpet cleaning business.... View Obituary & Service Information

The family of Sheriff Gary S. Borders created this Life Tributes page to make it easy to share your memories.

Send flowers to the Borders family.