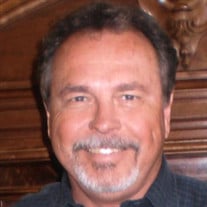 Fletcher David Smith, 69, of Eustis, passed away Saturday, March 5, 2022. Born in Lake City, Florida, served in the US Marine Corps during Vietnam. Fletcher then attended and graduated from Auburn University. Following that, he moved to Eustis in the mid 1970’s from Auburn. Fletcher was a volunteer for Boy Scouts America and was a scout leader for 7 years. He was also Santa Claus for many years at Pediatrics Health Choice in Leesburg and the Eustis Washington Historic Districts. Fletcher was a Paul Harris Fellow in Rotary International and a former member of the Tavares Rotary Club. He was an avid hiker for over 20 years in the United States and hiked many areas of the Appalachian Trail, the Grand Canyon and Mount Ranier. Fletcher achieved (2) hole in one's in his life when playing golf. He was a member of Lake Haven Church, Eustis. He is survived by his loving wife of 43 years, Cindy Smith of Eustis, FL; 2 sons, Sean D. (Jessica) Smith of Crestview, FL, Ryan D. (Catherine) Smith of Connecticut; daughter, Amy Froscello of Jewett City, CT; 2 sisters, Dorinda (Edward) Braswell of San Antonio, TX, Becky Gregory of Tuskegee, AL; sister-in-law, Donna Smith of Opelika, AL; brother-in-law, Jack (Carla) Eaton of Tavares, FL; 4 grandchildren, Madison, Mia, Brynlee, Angelo; numerous nieces, nephews, great-nieces & great-nephews. Fletcher was preceded in death by his brother, Frank “Sonny” Smith. A Celebration of Fletcher's Life will be held at Harden/Pauli Funeral Home, Eustis on Saturday, March 26, 2022 at 2:00 PM. In lieu of flowers, memorial donations may be made to (www.woundedwarriorproject.org) Online Guestbook available at www.hardenpauli.com Arrangements by Harden/Pauli Funeral Home, Eustis.

Fletcher David Smith, 69, of Eustis, passed away Saturday, March 5, 2022. Born in Lake City, Florida, served in the US Marine Corps during Vietnam. Fletcher then attended and graduated from Auburn University. Following that, he moved to Eustis... View Obituary & Service Information

The family of Fletcher David Smith created this Life Tributes page to make it easy to share your memories.

Send flowers to the Smith family.