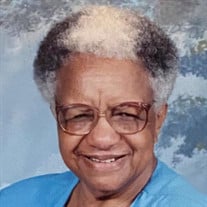 Eloise L. Gorman, 94, went peacefully on October 1, 2021, in Leesburg, Florida. Eloise L. Gorman was born in Newark, New Jersey, on June 21, 1927, to the Late John Gibson Leake and Laudessie Leake. She moved to East Orange, New Jersey in 1968 and then to Leesburg, Florida in May 2020. Eloise L. Gorman attended the Newark School System and graduated from South Side High School in 1945. She later worked and lived in Washington, D.C., before returning to Newark and later married the Late Lawyer W. Gorman. Eloise L. Gorman worked for the IRS as a Tax Auditor in New York for many years until her retirement in 1984. She was an Organist at the Union Baptist Church for over 50 years. During that time, her first assignment was being the Organist for the Dunbar Chorus. Rev. George L. Ray had a vision that she would be in charge of the Senior Choir and Young Adult Choir and asked her to be the Organist and Director. He later created the Junior Choir which was later renamed the “G.L. Ray Ensemble” in his memory. During her time as Organist and Choir Director she was affectionately called “Ms. G”. She was a mentor to all and she taught the choir members to “sing from your diaphragm, to read music, and said “you are not singing for yourself.” Eloise L. Gorman also believed "the words of the song mattered, and she made sure words were heard." She believed you never know how people feel when they come to Church, and that a “a song that you sing could touch someone and make a big difference in their lives.” Through Ms. G the Choirs learned all types of gospel music Negro Spirituals, Hymns, Contemporary music, Handel’s Messiah, and a Cantata. Eloise L. Gorman had the unique ability to know what songs the Ministers needed. The Ministers never had to ask her to play a special song because she always gave them precisely what they needed. After her retirement she was a "Mother of the Church." and served on many committees in the Church. In addition to being an Organist and Choir Director, she taught piano for many years. She had dozens of students and had beautiful piano recitals. Eloise L. Gorman is predeceased by her brothers John G. Leake, Horace B. Leake, Robert Leake, Richard L. Leake, Louis G. Leake, and one sister Constance L. Evans. One sister-in-law Redel Leake Morrall survives Eloise L. Gorman. She leaves behind a host of nieces and nephews, great-nieces and nephews, great-great nieces and nephews, and cousins as well as many choir members and piano students who loved and adored her, along with a host of family members and friends who will always cherish her memory. Eloise L. Gorman will be cremated in Leesburg, Florida, and a memorial service will be held in Newark, New Jersey, at a later date. Online Guestbook available at www.hardenpauli.com Arrangements by Harden/Pauli Funeral Home, Eustis.

The family of Eloise L. Gorman created this Life Tributes page to make it easy to share your memories.

Send flowers to the Gorman family.