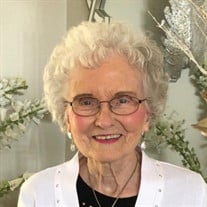 Elizabeth Newman, 88, of Tavares, passed away Monday, August 17, 2020. Born in Sylvania, Georgia, on January 20, 1932, she was the youngest of four children of Joseph and Ladessa Connor. She earned an associate’s degree from Georgia Teachers College where she met Gene Smith of Claxton, Georgia. They married in 1952. She taught school in Bellville, Georgia, for the 1953–54 school year. In May 1954, they moved to Tavares, Florida, where their three children were born. She joined the Tavares Methodist Church on August 1, 1954 and remained a member until her passing. When the children were older and she was single, Liz worked for the Triangle Shopping Guide, at J.C. Penney in Leesburg, and later as secretary to the director of the Lake County Schools transportation department, where she retired in May 1989. In 1986 she met Robert Newman, and they married in March 1988 in a service officiated by Rev. Randall Parsons. Liz and Bob enjoyed their retirement years by taking some twenty-five cruises, traveling to western states in their motor home, and becoming part of a camping group in Lake County. They built a house in Tavares and later moved to Eustis. Liz loved spending time with her family, and she enjoyed country cooking and discovering new recipes. After Bob’s passing in February 2014, she lived with her daughter and son-in-law, Cheryl and Al Ritchie in Eustis, until moving to Brookdale, Lake Tavares, in May 2019. She is survived by her daughter, Cheryl Lynn (Al) Ritchie of Eustis; sons, James Lee (Rita) Smith of Mount Dora and Samuel Patrick (Laurel) Smith of Eustis; six grandchildren (Rebekah, James, Hannah, Lacey, Wesley, and Austin) and five great-grandchildren. A memorial service will be held at Wooton Park, on Friday, August 21, at 10:30 a.m. In the event of inclement weather, the service will be held at First United Methodist Church of Tavares, 600 West Ianthe Street. Masks are required in the sanctuary, and seating is every other row. In lieu of flowers, memorial donations may be made to the Moffitt Cancer Center Foundation (www.moffitt.org) or First United Methodist Church of Tavares (fumctavares.com). An online guestbook is available at www.hardenpauli.com. Arrangements by Harden/Pauli Funeral Home, Eustis.

Elizabeth Newman, 88, of Tavares, passed away Monday, August 17, 2020. Born in Sylvania, Georgia, on January 20, 1932, she was the youngest of four children of Joseph and Ladessa Connor. She earned an associate&#8217;s degree from Georgia Teachers... View Obituary & Service Information

The family of Elizabeth Newman created this Life Tributes page to make it easy to share your memories.

Send flowers to the Newman family.