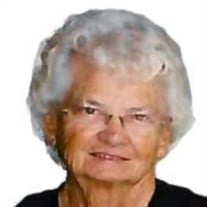 Doris M. Bugyi, age 91 years, of Eustis, Florida, formerly of Pittstown, NJ, died Wednesday, July 21, 2021, at Cornerstone Hospice & Palliative Care, Tavares, FL. Born in Pittstown, NJ, December 13, 1929, daughter of the late Delevan and Lucy Leaver Mathews, Doris had resided in the Pittstown area most of her life until moving to Florida several years ago. At one time, she had also resided in Promised Land, PA. She was a graduate of Flemington High School, Class of 1947, and was formerly a legal secretary for Robert DeChellis, Clinton, NJ. She was also formerly employed by the Hunterdon Medical Center, Flemington, NJ. Doris was a former member of the Quakertown United Methodist Church and of the Promised Land Church, Promised Land, PA. She was also a charter member of the Ladies Auxiliary of the Quakertown Fire Company and most recently was a member of the Southern Palms Church, Eustis, FL. Her husband, Paul M. Bugyi, died in 2009 and she was also pre-deceased by her sisters, Lenora Kurylo who died in 2016 and Elizabeth Sutphen, who died in 2000. Surviving are two daughters, Deborah Walker and Kathleen Sutter; two sons, John Bugyi and Richard Bugyi; ten grandchildren and nine great grandchildren. Services and interment in Locust Grove Cemetery, Quakertown, NJ.

The family of Doris M. Bugyi created this Life Tributes page to make it easy to share your memories.

Send flowers to the Bugyi family.