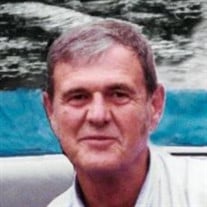 Donald Earl Porter, 82, of Dunnellon, went to be with our Lord on Thursday, April 29, 2021. Born in Eustis, Florida to the late Donald James & Gladys Porter, he grew up in Eustis and graduated from Eustis High School Class of 1957. Following High School, Donald attended the University of Florida earning his Bachelor of Electrical Engineering in 1962, and he began his career as an engineer for Florida Power, where he worked until his retirement. Donald’s sense of adventure and love of the outdoors was instilled by his family at an early age. His love of the water included competitive swimming, boating, and other water sports. As teenagers, Donald and his brother traveled to see Yellowstone and other landmarks on an epic month long adventure. He would continue road trips with his family throughout his life. Donald married his high school sweetheart, Linda Faye Nix, in 1960 and remained married for nearly 60 years until Linda passed away last year. Shortly after marriage, they started their family. Donald was a hard-working, devoted father and husband. He was a quiet man choosing his words carefully — full of wisdom or dry wit. Donald led by example with his love for God, Country, and Family. He instilled the value of planning and self-discipline and lived his life with integrity. Early retirement allowed more extensive traveling and enjoyment of the outdoors and time for his love of Jeeping. Donald had a network of friends from around the US that would convene each summer to enjoy God’s creation by way of jeep trails. Whether in Utah or Colorado, Donald enjoyed his time on trails and sharing his experience with others. He was a patient teacher and a wise trail leader. Many hours on the trail led to cherished lifelong friendships. Donald will be remembered and missed by his friends and family including his 2 daughters, Tammy (Jay) DeShan, Brentwood, CA, Julie Porter, Cary, NC; brother, David Porter, Eustis, FL; 3 grandchildren. Services will be held at Harden/Pauli Funeral Home in Eustis on May 8 at 2 pm. The family will receive friends prior to the services from 1pm till 2 pm. For safety reasons, the family has requested that everyone wear face coverings. Interment will follow at Greenwood Cemetery, Eustis. Flowers are accepted or memorial donations may be made to the Leukemia and Lymphoma Society at www.LLS.org. Online Guestbook available at www.hardenpauli.com Arrangements by Harden/Pauli Funeral Home, Eustis.

Donald Earl Porter, 82, of Dunnellon, went to be with our Lord on Thursday, April 29, 2021. Born in Eustis, Florida to the late Donald James & Gladys Porter, he grew up in Eustis and graduated from Eustis High School Class of 1957. Following... View Obituary & Service Information

The family of Donald E. Porter created this Life Tributes page to make it easy to share your memories.

Donald Earl Porter, 82, of Dunnellon, went to be with our Lord...

Send flowers to the Porter family.