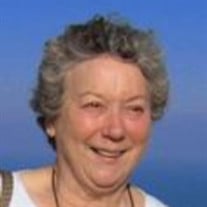 Dawn McGrath, 88, passed away on Wednesday, February 3, 2021. Born in Sheffield, England in 1933, she faced much adversity including surviving Scarlet Fever and losing her mother at a very young age. During WWII she and her family experienced bombings, rationing and separation, as Dawn was evacuated to the country for safety. She met her first husband William Burns, an American service man, when he was stationed in England during the Korean War. She moved to New York City at 24 years old and with her husband, raised four children. She worked for the Telephone company where she quickly moved up the ranks to become a Business Office Supervisor. She met her second husband James McGrath who also worked for the phone company. When Dawn retired she worked as a volunteer for a local senior center near her home in Lynbrook, NY. She received a community service award for over 20 years of volunteer work. Dawn was a voracious reader and was always reading a book, a trait she passed on to her children. She read the news paper every day and enjoyed the NY Times CrossWord Puzzle. While Dawn lived in the USA for over 60 years, she was very proud of her British heritage and maintained close contact with her family in South Yorkshire, England. She is remembered by anyone fortunate enough to have known her, to be not only beautiful and appearing younger than her age, but also to have a biting and dry sense of humor and was well liked. Dawn was predeceased by both of her husbands. She was survived by her four children, Christopher (Rose) Burns of Santa Rosa, CA, Donna Burns of Mount Dora, FL, Daniel Burns of Upstate NY, and Jeanette (Tony) Trujillo of Norwalk, CT. She is also survived by her 10 grand children, 3 great grandchildren, extended family and friends. She was the youngest of 6 children, predeceased by her Brother George (Joyce) Hibbert and Sisters, Edna Hibbert, Grace (Jack) Thompson, Esme (Colin) Burch and Millicent Hibbert. Having experienced much hardship in her life, she was made of cast iron and her strength and independence inspired others. She was a loving mother and her passing is a huge loss to the many who have loved her throughout out her long life. Memorial services will be held at a later date. Online Guestbook available at www.hardenpauli.com Arrangements by Harden/Pauli Funeral Home, Eustis.

Dawn McGrath, 88, passed away on Wednesday, February 3, 2021. Born in Sheffield, England in 1933, she faced much adversity including surviving Scarlet Fever and losing her mother at a very young age. During WWII she and her family experienced... View Obituary & Service Information

The family of Dawn McGrath created this Life Tributes page to make it easy to share your memories.

Send flowers to the McGrath family.