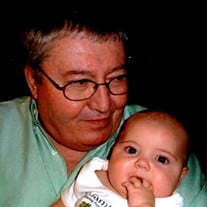 David Donald Hopfensperger “If they asked me, I could write a book…” David Donald Hopfensperger, who moved to Florida in 1986 and lived in Leesburg these past 31 years, went to be with God and the Angels on Sunday, November 15 in the wee small hours of the morning, as a result of complications of Lewy Body Dementia. He was born in Appleton, WI and raised in Green Bay. While the terrorist in his brain stripped him of much, it could never touch his essence – his gentleness, his humanity, his gratitude for the smallest kindnesses, his beautiful smile, and his love. His love of Gershwin and John Lennon. His love of the tactile pleasure of holding a new book in his hands. His love of lifelong learning. His love of all things New York. His love for the Green Bay Packers. His love for his country and for those who served it and serve it now. His love for his Beloved Sheryl Garelick, for his firstborn Nora (and her remarkable children Sarah and Lake), his son Karl and wife Brittany (and their ray of sunshine Alexander). His love for his beautiful sister Karen Deprey, brilliant, talented brothers Thomas and Richard Hopfensperger (and his lovely wife Sally), and for all their children. He was so incredibly proud of them and visited them frequently in his memories when it became less possible to be with them in person. His love for his extended family Holly, Phil and Rebeccah Bauerlein, Jaclyn and Danny Weems (and their three children), Eugene and Rosalia Garelick, Nicholas Garelick and Lauren Hainley and Ted and Jacqui Garelick. His love for Veronica Mitchell and Barbara Shannon who brought him joy and made him smile by caring for him with extraordinary patience and love. And his love for friends and family who had gone before, like Ron Lettman, John O’Hara, Albert Garelick, and his Uncle Jackie. In return, he was loved more than life itself. “It’s very clear. Our love is here to stay. Not for a year. But ever and a day.” - George Gershwin In lieu of flowers, it is our request that donations be made in David’s name to the Tom and Kim Ruggie Family Foundation, 2100 Lake Eustis Rd., Tavares, FL 32778. Online Guestbook available at www.hardenpauli.com Arrangements by Harden/Pauli Funeral Home, Eustis.

The family of David Donald Hopfensperger created this Life Tributes page to make it easy to share your memories.

Send flowers to the Hopfensperger family.