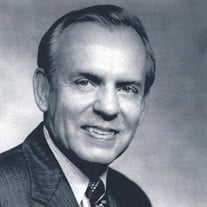 Darrell George Haass, 102, of Mount Dora, FL, passed away Tuesday, June 29, 2021. Born and raised in Frankfort, Illinois, he was the son of Maximillian Haass and Lottie Haass (Peters), the grandson of Dr. Emil Haass (Civil War surgeon and town doctor) and Eliza Haass, and the brother of Max Haass Jr. His commitment to excellence and desire to lead became very clear in his college and military days. He received his B.S. degree (with honors) in Management from the University of Illinois, College of Commerce. In addition to being active in a wide variety of campus organizations, including the University Flying Club, he was the President of his fraternity, Sigma Phi Epsilon. Darrell’s time at the university was temporarily interrupted when he enlisted in the US Armed Forces in the month following Pearl Harbor. He entered as a Private and worked his way up to Captain in the US Army Signal Corps during World War II. He served as Radar Siting Officer for the Fifth Fighter Command in the Pacific theater and was accredited with multiple ribbons and three Bronze Service Stars for his contributions in the New Guinea, Southern, and Northern Philippines campaigns. Following his service, he returned to the University of Illinois to finish his degree, graduating in 1947. Darrell’s zest for life, along with his determination to make the most of everything he did, continued when he moved to Orlando in 1948. A successful businessman, he founded American Pioneer Life Insurance Company and its subsidiaries, holding the titles of Chairman, CEO and President. Over the years, he served on a number of Boards, including: as the Director of the Florida Association of Life and Casualty Insurers, Inc.; Budget and Finance Chair on the State Board of the American Cancer Society; ComBank/Winter Park, and Rio Pinar Country Club. In addition to being a member in various clubs in Central Florida, he was a member of the Committee of One Hundred of Orange County. As he did in his business and community endeavors, Darrell was also active in Park Lake Presbyterian Church where he served as the Clerk of the Session and Elder, and was the President of both the Men of the Church and the PresbyWed Class. He became a member of the First Presbyterian Church of Mount Dora when he moved there 21 years ago. While Darrell worked tirelessly, he also enjoyed everything he did, always smiling and interjecting humor whenever he could. His happiness and charismatic flare permeated his interactions with others, and he truly loved to socialize and connect with people. His huge variety of interests, everything from playing chess to flying, included his fascination with investing and the stock market. Combining those particular interests with his desire to socialize, he found great pleasure in forming long-lasting “Associated Investors” clubs in Orlando and Mount Dora. Over the years, with unwavering optimism, he thoroughly enjoyed golfing, fishing, hunting, and flying. Beyond all of his many interests, Darrell most enjoyed spending time with his beloved family. He was a loving, devoted father to his two daughters, sharing his values, standing by them and holding their hands throughout their lives together. He is survived by his daughters, Diane Butt of Mount Dora, FL, and Nancy Mentzer of Yalaha, FL. Services will be held at Harden/Pauli Funeral Home, Eustis on Saturday, July 17, 2021 at 1:00 PM. Memorial donations may be made to the American Cancer Society (http:/donate3.cancer.org/). Online Guestbook available at www.hardenpauli.com. Arrangements by Harden/Pauli Funeral Home, Eustis.

The family of Darrell George Haass created this Life Tributes page to make it easy to share your memories.

Send flowers to the Haass family.