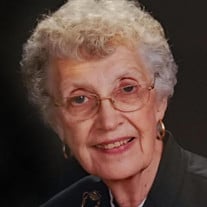 Darleen M. Petersen was born in Kansas City, Missouri, on October 21, 1931, the adoptive daughter of Chris E. and Elsie M. Holm. She was baptized and confirmed at Immanuel Lutheran Church in Hampton, Nebraska, graduating from Hampton High School in 1949. Darleen attended Dana College in Blair, Nebraska for one year, then transferred and graduated from the University of Nebraska-Lincoln in 1954, with the degree in Music Education. Darleen started her career as a high school music teacher in Harlan, Iowa from 1954-1956, where she met and married Stan Petersen on June 15, 1956 in Omaha, Nebraska. She then taught elementary music in St Paul, Minnesota while Stan completed his education at the University of Minnesota. In 1957, they moved to Mason City, Iowa, where Darleen taught private piano lessons in their home and was the choir director at Trinity Lutheran Church. After Darleen and Stan moved to Forest City, Iowa in 1961, Darleen went back into the classroom in 1968 at Forest City, Iowa Community Schools until her retirement in 1989. Darleen was a member of Immanuel Lutheran Church in Forest City, was a member for both Iowa Music Educators Association and National Music Educators Association. In 1993, she and Stan moved to Mount Dora, Florida, becoming active in the Mount Dora Women’s Committee for the Fine Arts, where she co-chaired the Scholarship Committee. They also joined the First Presbyterian Church of Mount Dora. In 2012, they made their home in independent living at Waterman Village, Mount Dora until December 9, 2022 when Darleen entered the Edgewater rehab facility after having broken her hip. She entered full nursing and hospice care in January 2022, and passed away quietly in her sleep on March 19, 2022 at the age of 90. She is preceded in death by her husband Stan Petersen, along with her parents Chris & Elsie Holm, her brother Allen Holm and his wife Joyce, a niece Glenda Holm and one grandson Hayden Mullaney. She is survived by her children, Trudee Green (Sean) of Robertson, New South Wales Australia, Sandra Gaston (Doug) of Orlando, Florida and David Petersen, of Jamberoo, New South Wales Australia. Grandchildren Dr Ben Mullaney (Dr Holly Champion) with great grand-daughter, Clio, Logan Mullaney (Sophie) with great grand-children Ruby and Tommy, Ryan Mullaney, Ian Gaston (Leandra Rigdon) and Natalie Gaston along with three nieces and one nephew. As a creative person, Darleen leaves a legacy as a private music teacher, a versatile performer, gifted pianist and accompanist, choir director, professional educator and creative mentor. Not only did she have a major influence on the creative lives and careers of her children and grandchildren, but she will also be remembered by countless students she inspired over her decades of teaching. Darleen was so strongly connected to the Danish heritage of her parents, that she maintained relationships with her extended Danish family throughout her life, and enjoyed incorporating the colourful culture, crafts and food into her own family life and community. In lieu of flowers, donations can be made to the Women’s Committee of Fine Arts of Mount Dora. PO Box 1053 Mount Dora, FL 32756 A small, private graveside memorial for the immediate family will be held at Lakeside Memory Gardens, 36601 County Rd. 19A, Eustis, FL. 32726, on 4/13/2022 at 2pm. Soon thereafter, a link to view the YouTube video of the service can be shared by sending an email to [email protected]

The family of Darleen M. Petersen created this Life Tributes page to make it easy to share your memories.

Send flowers to the Petersen family.