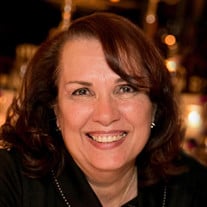 Cynthia J. Adams, age 69, passed away peacefully at Waterman Hospital surrounded by her family on June 22, 2021, after a brave and graceful battle with an unexpected illness. Cynthia’s story began on October 26th, 1951, in Dixon, Illinois. She was the daughter of the late William and Jean Steward and younger sister Debra. Her father was in the Air Force so she live all over the United States and England growing up. During her time abroad she visiting many places and her love for art grew. She attended Western Illinois University and received a Bachelors in Fine Arts. On July 14th, 1973 she married her high school sweetheart and love of her life, John L. Adams. They finished their senior year at Western Illinois and moved to Appleton, Wisconsin where John took a job at Peterson Seed Co. and she work as an art teacher for Outagamie County Schools, they lived here for 5 years. It was during their time there that Cynthia began her favorite chapter of her life - Motherhood. She gave birth to their son John Hayden in November of 1976. In 1978 the couple moved to Burlington, Iowa where they welcomed their daughter Esther Louise in October of 1979. The moved shortly after in 1982 to her hometown of Dixon, Illinois to be near her beloved grandparents Francis and Jean Jennings. In the fall of 1986 the family moved to Mount Dora, Florida and has remained living in Florida since. It was important to Cynthia to be home with her children. She went back to school and earned a certificate as a Learning Disability Therapist where she applied much of her art skills to help children learn and began teaching part-time at the Christian schools her children attended. There was nothing more important to Cynthia than her family. She was a loving and devoted wife and mother. She enjoyed participating in her children’s athletic and other extra-curricular activities, nothing brought her more joy than seeing her children happy. Cynthia treasured her time with her husband and children and loved humbly serving them. She will be remembered by them for her infectious smile, selflessness, strength, unconditional love and of course her cooking. She was a master of whipping up something from nothing, she would take random ingredients in the cupboard and refrigerator and make the most amazing meals. Cynthia was one of the founders of Live Music Tutor, Inc. She was responsible for customer experience, instructor recruiting, and graphic design. She did editing for a book and loved to help others with art and music. Cynthia is survived by her husband of 48 years, John L. Adams, her son John Hayden Adams and his wife Paige, her daughter Esther Louise Hamrick and her husband Josh. Her beloved cats Max and Buster and her four grand kitties. She is preceded in death by her sister Debra Steward, her parents William and Jean Steward, her grandparents Francis and Jean Jennings, her aunt Judy Jennings and great aunt Esther Longanecker. A celebration of her life will be held at Trinity Church, (890 Abrams Rd, Eustis, Fl) on Saturday, June 26, 2021 at 11:00 AM. Flowers are accepted or donations may be made to Cat Protection Society, P.O. Box 1078, Sorrento, FL 32776. (www.thecatprotectionsociety.org) Online Guestbook available at www.hardenpauli.comArrangements by Harden/Pauli Funeral Home, Eustis.

Cynthia J. Adams, age 69, passed away peacefully at Waterman Hospital surrounded by her family on June 22, 2021, after a brave and graceful battle with an unexpected illness. Cynthia&#8217;s story began on October 26th, 1951, in Dixon, Illinois.... View Obituary & Service Information

The family of Cynthia J. Adams created this Life Tributes page to make it easy to share your memories.

Send flowers to the Adams family.