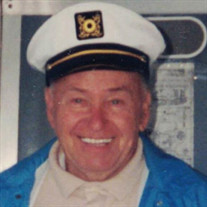 Charles Salai, 93, of Tavares, FL, passed away Wednesday, May 27th, 2020. Born in Fairmont, WV, his family moved to their hometown in Slovakia shortly after his birth, returning back to WV when he was 9. English was his second language. Charles later served in the United States Navy before moving to Detroit where he met his wife, Eleonore. They made a home in Taylor, MI and then Livonia, MI, before retiring to Tavares, FL in 1992. He was the loving father of Rosemarie (Tony) Scharmen, Charles Salai, Delphine Salai, Chris (Darell) Rickard, Daniel (Barbara) Salai and Kathleen (William) Howell. He also leaves behind seven grandchildren, and his long-time special friend, Ginger. Charles was a pipefitter at Ford Motor Company in Livonia, MI for 37 years, and built two homes in Taylor, both while working full time and raising his young family. The next chapter of their lives, in Livonia, included another completely remodeled home, which he also finished single-handedly. He was known for his years of automotive knowledge and creative ingenuity, often making tools or other handy contraptions, instead of buying them. He would say, “Necessity is the mother of invention.” He will always be remembered for his tool of choice, Liquid Nail. He loved the outdoors, camping and boating and was an avid gardener. In retirement, he enjoyed many cruise vacations with his wife, enjoyed tinkering around the house and keeping a close eye on the stock market and his avocado tree. His outgoing personality and sense of humor ensured he made friends wherever he went. We will remember our Dad’s favorite phrase, “Old too soon, schmart too late..” though there was nothing late about his smarts. Charles was preceded in death by his devoted wife, Eleonore Salai and his many beloved parakeets. A memorial service is planned, date to be determined.

Charles Salai, 93, of Tavares, FL, passed away Wednesday, May 27th, 2020. Born in Fairmont, WV, his family moved to their hometown in Slovakia shortly after his birth, returning back to WV when he was 9. English was his second language. Charles... View Obituary & Service Information

The family of Charles Salai created this Life Tributes page to make it easy to share your memories.

Charles Salai, 93, of Tavares, FL, passed away Wednesday, May...

Send flowers to the Salai family.