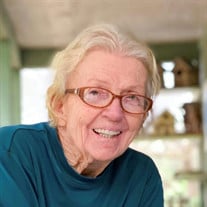 Betsy Helen McCall Fowler passed peacefully in the home she imagined, designed, and sustained in Christmas, FL on the afternoon of Tuesday, October 12, 2021. Helen provided a calm spirit, a steady guidepost, and an overflowing force of love... View Obituary & Service Information

The family of Betsy Helen McCall Fowler created this Life Tributes page to make it easy to share your memories.

Send flowers to the Fowler family.