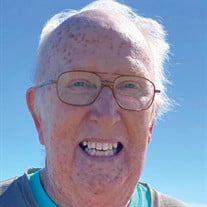 Bernard L. Welch, 83, of Zellwood, passed away on Thursday, March 3, 2022. Born in East Chicago, Indiana, Bernie spent his early years in the northwest Indiana area. Bernie graduated from Holy Cross Seminary at Notre Dame, Indiana University in Bloomington, Indiana and was a former Josephite priest. From an early age, Bernie was all about being a voice for various social justice issues. He became a voice for the sick, the poor, the homeless and anyone who needed a hand. In the 60's, he was involved in many protests of the era. During the 70's, Bernie was in New Orleans working among the African American community with the Josephite Fathers. In the late 80's, he moved to Florida where he worked as a counselor in the Florida prison system. After retirement, he continued ministry work through his involvement in causes such as the death penalty, homelessness and other social justice issues. Bernie was a devoted and long-time member of St. Patrick Catholic Church, in Mount Dora. He was an avid writer and he loved poetry. He loved his Savior, family, friends and community; he will be missed by all. Bernie is survived by his 3 daughters: Ellen Johnson of Orlando, Florida, Anna Murray of Gotha, Florida, and Lisa (and Todd) Curlee of Port Orange, Florida; 4 grandchildren: Lex, Matthew, Lillian and Bella; a sister, Danna Conley of Indiana; a niece, Kelly, a nephew, Tim and their children: Kyle, Tyler and Magen Conley. He was preceded in death by his parents Carmelita and Ray Welch, his wife Marie Matthews and nephew Terry Conley. A wake will be held at St. Patrick Catholic Church, Mount Dora on Thursday, March 24th at 6 pm and the funeral mass will be on Friday, March 25th at 9 am. In lieu of flowers, memorial donations may be made to the JMJ Pregnancy Center (www.jmjpc.org) or to St. Joseph’s Society of the Sacred Heart, The Josephites (www.josephites.weshareonline.org). Online guestbook available at www.hardenpauli.com. Arrangements are by the Harden/Pauli Funeral Home, Eustis.

The family of Bernard L. Welch created this Life Tributes page to make it easy to share your memories.

Bernard L. Welch, 83, of Zellwood, passed away on Thursday, March...