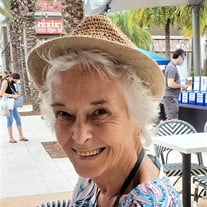 Beatrice E. Paulhamus, was called by many names Bea, Honey, Mom, Mrs. P, Aunt Beaty and Beabop! This lovely lady celebrates 79 years, which began in Montoursville, PA in 1942 because of the love of Mildred and Earnest Easton. Life was good. Shortly after graduating from high school – she mistook Dad as another fellow named "Skip" at the State Fair! Frank Paulhamus answered “I’m not Skip but won’t I do?” He must've because they married and left town in 1962 when they moved to Florida, the land of oranges, sunshine, alligators and muck land! They were so brave to embark on an adventure so far away from home, family and friends! Bea and Frank teamed up with brother Gene and his wife Carol to invest in a farm by working day & night. As their family of 4 kids Gail (who married Milton Neu) Glenda, Karen (who married Joe Clements) & Rick (married Rebecca Lawrence) grew so did Eustis Muck Farms to 700 acres. It soon became a real “family farm”. Growing sweet corn was the staple and when asked by the Abbot and Cobb seed salesman to introduce and name a new variety of bi-color corn. “Candy Corn” was launched! This bounty became popular and was sold locally in Eustis, then nationally, starting with Kroger's Grocery in Tennessee for the masses to enjoy! Bea & Frank attended Bay Street Baptist Church and became Sunday school teachers to many of Eustis’ youth! They guided, fed and hired many of us – to work on the farm or at the corn stand where we learned to work as a team, do the job until it’s done and many more life skills that we suspect are appreciated even today. Although Dad (Frank) taught us that hard work could be fun we suspect that it was Mom (Bea) who distracted or rewarded us from the work with really good home cooked food! It was clear that Mom’s ‘love language” was cooking and baking! Her catering business was another family effort where we learned to serve and witness many brides serve her beautiful cake and always asked for her fruit punch recipe – which she made us swear to keep secret! Glenda has been a rock helping Dad to care of Mom this past year or so. Karen married Joe and Rick’s life got better when he married Rebecca! Bea wasn’t perfect, she didn’t like grumpy people and hated canned laughter on TV! Her kids had a healthy respect for her powerful glare if we talked during sermons or had candy wrappers that were too loud! Which we of course blamed on Dad the ultimate candy-man! But Mom’s eyes lite-up for a box of Whoppers, kettle corn or anything that Rick cooked that wasn’t burnt! She would apologize profusely for distracting from the Lake County Fair tonight! Mom said her life verse is John 3:16 which makes sense because of her sacrifice not just for her family but also for her community. She joined the Jr. Women’s Club, was President of Florida Farm Bureau’s Women Committee and a board member for the Lake County Fair. She cared in many ways, giving food to the hungry, sewing an entire cheerleading teams’ uniforms, driving baseball teams to and from games and she allowed us to bring abandoned animals for nursing (mostly piglets) into the house (that she worked so hard to make a home). But mostly for remaining quiet when we embarrassed her by bragging about it to friends! She was a trooper! But Mom’s best gift was her laughter. We knew everything was ok if we could get Mom to laugh. She taught us to not take ourselves too seriously and that life is good if you take the time to really look at it. Bea laughed right up until the end and she will be sorely missed by her husband, Frank, her 7 kids (3 married into this crazy bunch!); 7 grandkids (2 more married in!) Bradley & Barbra Jean, Bobby & Valerie, Stephanie, Emma Lou and Cora Bell; and 1 great granddaughter, Gracie Lynn; her Brother, Stuart & Nancy Easton and sister Pat & Cal Tilley and many more nieces, nephews and friends who became family! The world is better place because you were in it with us! We are sad right now but we do KNOW that we’ll be back together one day! We can only say we’re glad she never found Skip!

Beatrice E. Paulhamus, was called by many names Bea, Honey, Mom, Mrs. P, Aunt Beaty and Beabop! This lovely lady celebrates 79 years, which began in Montoursville, PA in 1942 because of the love of Mildred and Earnest Easton. Life was good.... View Obituary & Service Information

The family of Beatrice E. Paulhamus created this Life Tributes page to make it easy to share your memories.

Send flowers to the Paulhamus family.