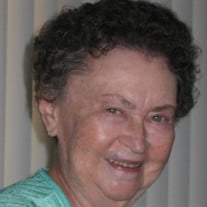 The family of Audrey Herring of Mount Dora, Florida announces her passing on Thursday, November 18, 2021, at the age of 94. It is with great sadness, because we will miss her greatly, and yet with great joy, as she goes to be with our Lord. She was born in Decatur, Illinois on September 3, 1927. In a family of three children she grew up as a solid Midwesterner. She frequently shared memories and old photos with her family and we treasure those stories about growing up in Illinois. She graduated from Decatur High School specializing in business and began a career as secretary to the School Board. In 1948 she met a young Floridian, Tom Herring, who had a career with the U.S. Army and was stationed in Decatur. In 1950 she flew to the Panama Canal Zone to marry Tom and until Tom retired from the army in 1961, she spent the next eleven years as an army wife, living in Panama, Maryland, Illinois, Japan, and North Carolina. They had two girls, Sue and Janet, and settled in Orlando, Florida after the army. In Orlando, Audrey was a long-time church secretary at Reeves United Methodist Church. Her lifelong spirit for travel and adventure resulted in many travels, both far away and nearby. Much of her local travel involved visiting family and old friends, both old Decatur friends and military ones. As the children grew up, her travels ranged farther away and she travelled to Canada, Alaska, Great Britain, Ireland, France, Scandinavia, Switzerland, Germany, Italy, Panama, Peru, and Egypt. After she retired, her dedication to service to others found her an active volunteer for the American Braille Association, the Mount Dora library, and a local school. Her hobbies included sewing, knitting, oil painting, and gardening. She always had time for her family through babysitting for her grandsons regularly and providing weekly Sunday dinners for her daughters and their families. She is survived by her daughters, Sue Riley Turner (Dennis) of Winter Garden, Florida, and Janet Hinchee (Lowell) of Mount Dora, Florida, grandsons Brett Riley of Orlando, Florida, David Hinchee of Palm Harbor, Florida and John Hinchee of Tallahassee, Florida. She is also survived by her sister, Ila Bower of Longwood, Florida. A Memorial service will be held on Saturday, November 27 at 10:30 AM at the First United Methodist Church in Mount Dora.

The family of Audrey Herring of Mount Dora, Florida announces her passing on Thursday, November 18, 2021, at the age of 94. It is with great sadness, because we will miss her greatly, and yet with great joy, as she goes to be with our Lord.... View Obituary & Service Information

The family of Audrey Jeannette Herring created this Life Tributes page to make it easy to share your memories.

The family of Audrey Herring of Mount Dora, Florida announces...

Send flowers to the Herring family.