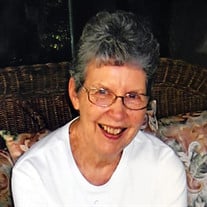 Agnes Bierbaum, a loving wife, mother, grandmother, great-grandmother, and friend to all whose lives she touched, passed away peacefully in Tavares, Florida on March 24, 2021. She was 86. A funeral mass will be held at 9:00 AM, Wednesday, March 31, 2021 at St. Patrick’s Catholic Church, Mount Dora, Florida. For friends and family unable to attend in person, the service will be live-streamed and can be accessed at this link: https://www.youtube.com/channel/UC3jhCVQwLdUbsU8-NlzhXMA?view_as=subscriber. Born in St. Louis, Missouri, Agnes was the youngest of four children of Robert A. and Agnes G. Neudeck. Her family moved to Ste. Genevieve when she was four years old. In Ste. Genevieve, Agnes quickly learned the skills of living on a farm. She often assisted her older brother, Robert (Neudeck), with gathering the hay and other farm chores. She spent many hours with her sisters, Jane (Loida) and Anne (Beyatte), doing chores such as mowing the lawn, feeding the chickens, and washing the car, while also finding time to spend at the family pond. Agnes was a “queen” both at her Catholic High School in Ste. Genevieve and during her college years at Cape Girardeau, MO. In high school, she followed in her sister’s footsteps, being selected the third May Queen from her family. In college she was chosen as yearbook queen and crowned at the annual Sagamore Ball. Beginning with her college years (1952-1955) in Cape Girardeau, MO, Agnes pursued a highly productive career as a speech pathologist. During 1965, she earned a Master’s degree from the University of Missouri-Columbia in her field of specialization. She continued as a public school speech pathologist during her years in Quincy, IL (1961-1963), Milwaukee, WI (1965-1968), and Cortland, NY. In college, Agnes met Gene Bierbaum in the school orchestra. Agnes played violin and Gene played trumpet. Following a two-year campus courtship and two years of Gene’s military service, they were married at St. Joseph’s Catholic Church in Zell, Missouri, on June 9, 1956. During 1957-1965, Agnes became the loving mother of five children, all of whom survive her: Paula Bogardo (Lancaster, PA), Ellen Carter (Leesburg, FL), Mark Bierbaum (West Hartford, CT), Diane Muckstadt (Burlington, VT), and Robert Bierbaum (Lumberton, TX). During her later years, she delighted in becoming a grandmother to 14, and a great-grandmother to 12. During 1968 -1992, Agnes pursued an active lifestyle in Cortland, NY. She served as president of the Parker Elementary School PTA, Cortland High School Band Boosters, and the Faculty Wives Association at SUNY-Cortland. She and her husband, Gene, had frequent social gatherings and bridge games at their home. They traveled extensively to Alaska, Hawaii, France, England, Germany, Denmark, and Switzerland. Enthusiastic supporters of environmental concerns, they attended summit conferences of the National Wildlife Federation in several states. Agnes also volunteered at the Morningside Nature Center in Cortland, later to be followed by similar service in Asheville, NC, and Gainesville, FL. Gene gave Agnes her first stringed dulcimer for their 25th wedding anniversary, and she began attending workshops. A few years later, she gave a dulcimer to Gene as a birthday gift, and they attended dulcimer workshops together, ultimately developing duet programs which they performed for various social gatherings and retirement communities. From 1992 - 2005, Agnes and Gene were “snowbirds”, maintaining residences in both New York and Florida. During these years they initiated family reunions, attended by all their children and grandchildren. In addition to the reunions, they visited each child and each grandchild (in five different states) at least once annually. In 2006, Agnes and Gene became permanent residents of Florida. Agnes was always a very giving person, and a friend to the lonely and forgotten. An accomplished musician, she frequently played her violin and dulcimer at charitable gatherings. She was active as a member of the nursing home volunteer network, Friends Across the Ages, and regularly visited and took home-baked goods to nursing home residents. She volunteered to assist Gene with his line dance calling for numerous workshops and community functions. She also performed regularly with various volunteer community choirs. In 2010, Agnes wrote and published a book, Reaching Out to Others, about the difference volunteering can make in the lives of others. In addition to her five children, 14 grandchildren, and 12 great-grandchildren, Agnes is survived by her husband, Gene Bierbaum (Tavares, FL), sister-in-law, Madge Bierbaum (Chesterfield, MO), and numerous nieces and nephews. In lieu of flowers, the family invites you to consider a memorial donation to Friends Across the Ages (https://www.friendsacrosstheages.org).

Agnes Bierbaum, a loving wife, mother, grandmother, great-grandmother, and friend to all whose lives she touched, passed away peacefully in Tavares, Florida on March 24, 2021. She was 86. A funeral mass will be held at 9:00 AM, Wednesday, March... View Obituary & Service Information

The family of Agnes Marie Bierbaum created this Life Tributes page to make it easy to share your memories.

Send flowers to the Bierbaum family.